Sometimes we can miss things that are happening around us, because we are too focused on our own actions and activities. By zooming out, we can take a wide-angle, helicopter view to consider the context and industry we operate in.

The modern world’s busy, time-constrained nature causes us to seek out quick fix, tactical approaches where possible. But these approaches are often limited in scope, and rarely cause big shifts in the marketplace.

By zooming out, we take the wide-angle, helicopter view. We might consider a whole industry rather than just a single product, or look for the root causes of a latest trend. We might choose to solve a bigger, more fundamental problem.

In doing this we can conceive a much more strategic, far reaching and ambitious approach that is more likely to have a significantly higher impact. Imagine you're trying to solve a problem. What caused that problem?

Let's think of an example: trying to lose weight. John has been trying for years to lose weight, but despite following several diets, he fails to stick with them for long enough, and any weight lost is quickly put on again. If he could only find a diet he could stick to!

So - is it the diets that are the problem, or John's approach? By zooming out we can start to look at John's overall lifestyle. He has a busy job, and often ends the working day feeling frazzled. When he comes home he finds the the pizza and beer in the fridge far more appealing than the diet food next to it.

It seems obvious - just stop buying pizza and beer. By removing the temptation, John will find it easier to stick to the diet food.

But even when he manages that, John eats too much of the diet food. So let's look a little deeper. John ends the working day feeling frazzled.

He looks for something to relieve his stress - and he finds stress relief through eating and drinking. If we tried to help him cut out the stress, maybe he wouldn't feel the need to eat so much.

So - maybe John could try stress management techniques, such as taking more breaks, or working out at lunchtime, or changing his job. By zooming out, we see that the problem might not be the diets, and the solution therefore might not be food-related.

Next time you need to solve a problem, create a plan or come up with an idea, think about how you might zoom out to consider the wider issues and opportunities. Is there a bigger, more ambitious, more fundamental problem you could try to address?

Find this session in these workshop outlines: 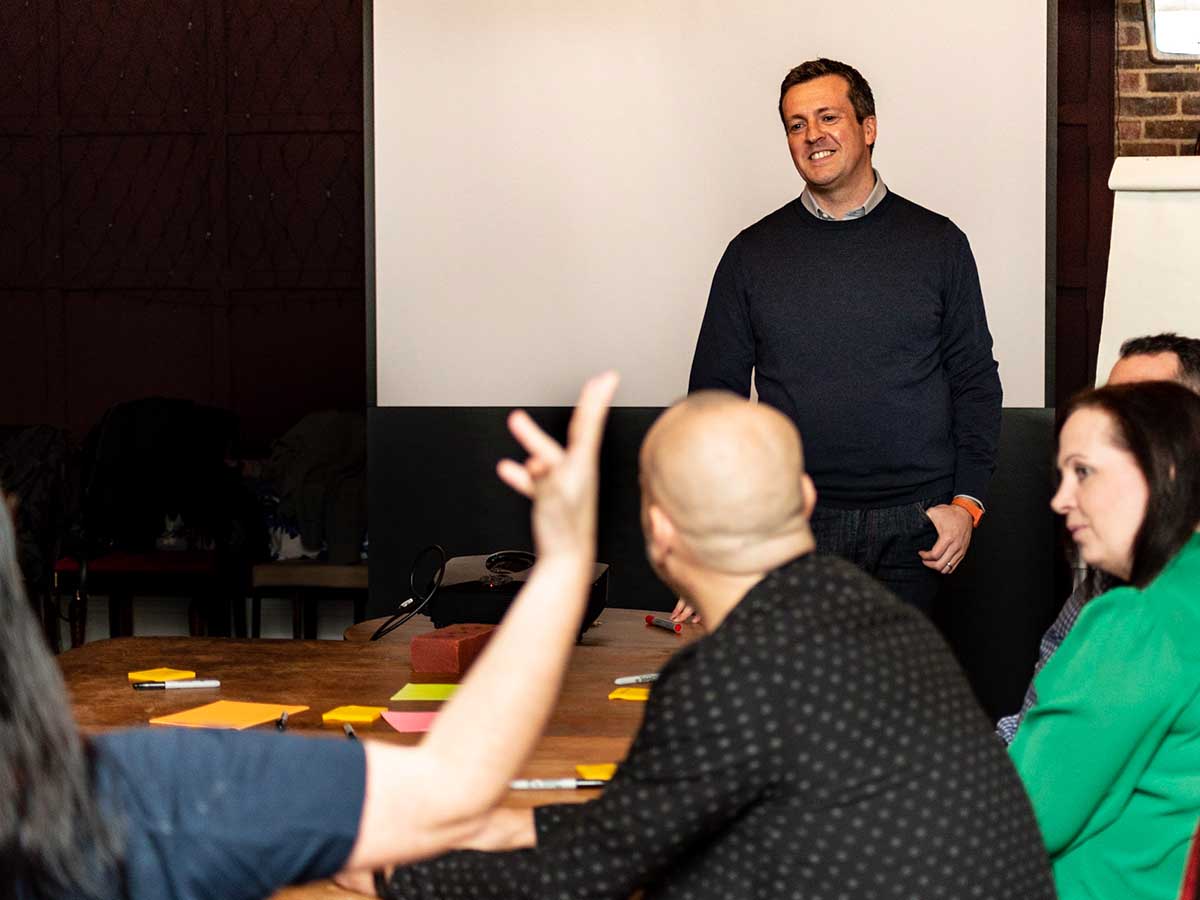 Take valuable time out with your leadership team to review your organisation's performance, and reassess your vision, objectives and approach.
TIME
full day
PARTICIPANTS
10-20
LOCATION
Any venue

Take a look at these other session elements:

Values are the guiding principles that you use to make decisions about what you work on and how you go about it. They drive your priorities, attitudes and behaviours, keeping you on track as a business. Discussing these as a team can lead to greater cohesion and team spirit.

As a group, everyone discusses an effective system for arranging tasks, making decisions and maintaining standards. We help make sure that every task and objective has someone who is responsible for its success, and that each accountable person receives the support they need from others on the team.

The team clarifies and discusses its mission. What is the ultimate criteria against which the team's success will be judged? What is the big picture strategic goal? Often this section starts with a presentation from the team leader, and we facilitate questions and subsequent discussions.